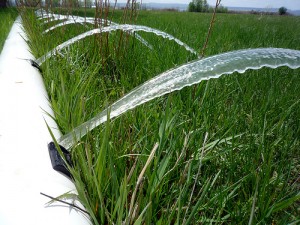 A documentary filmmaker hopes to put the High Plains water issues into a historic and scientific perspective. The documentary, which is being financed through the funding platform Kickstarter, will record the struggles faced by farmers as they battle drought, wind and the unpredictable nature of a warming climate. It asks communities what choices they can make before the well runs dry.

This project is the brainchild of filmmaker Merri Lisa Trigilio, who is both a documentarian and a geoscientist. During her career, Trigilio has worked not only with multinational oil companies but also as a researcher in carbon sequestration. She also recently served as a fellow at the Smithsonian Museum in Washington, D.C., where she wrote and produced documentaries. Now that the project has reached its funding goal, it’s safe to say this documentary will soon be in the works. For those of us who are familiar with the High Plains water issues, that’s exciting.

Keeping Up With Irrigation Demands

The Ogallala Aquifer is one of the world’s largest aquifers and covers an area of approximately 174,000 square miles in portions of South Dakota, Nebraska, Wyoming, Colorado, Kansas, Oklahoma, New Mexico and Texas. With almost 56 percent of U.S. grain, beef and cotton produced as a result of irrigation, the Ogallala Aquifer plays an essential role in keeping these industries afloat.

The initial waters that fed the aquifer were sourced from 10,000-year-old glaciers, but now the only water source that consistently refills the aquifer is modern-day precipitation, which isn’t enough to keep pace with irrigation demands.

Trigilio says “my passion for water issues is based in my scientific background, but spending many months with the people of West Texas and Southwest Kansas has caused me to become passionate about how the aquifer enriches people’s lives — and how that is in jeopardy. This is a film that hopes to put water issues in the West in a global historic and scientific perspective.”

The documentary has reached its funding goal of $4,500, but there are still a few days left of the campaign. Trigilio says the Kickstarter funding will be used to interview scientists and policy makers. The $4,500 will be used to finance a three-week shoot schedule, which will cover the cost of transportation across Kansas, Texas and New Mexico, lodging, food and film equipment rental.

Kickstarter is a funding platform dedicated to making creative projects possible with direct support from anyone around the world. Once a project has set a funding goal, people make pledges; if a project reaches its funding goal, pledges are processed by Kickstarter and filming can begin.

How Can You Help?

If you’re interested in water issues, especially as they relate to the High Plains and the Ogallala Aquifer, this is a project you should know about. If you’re interested in funding it, that’s great, but our goal is to raise awareness about the issue more than anything else. If you’re interested in being interviewed and/or contributing in some way, you should reach out to Groundwatermovie.com. Help spread the word to your connections who might also be passionate about water issues through Facebook, Twitter, LinkedIn, email and other outlets. The more people who are aware of these challenges and the threat to farmers and others living in the areas impacted most by this water crisis, the better.

What do you think of the impending drought faced by farmers today? We’d be interested in hearing your opinions.