The Importance of Preserving Groundwater

When an aquifer is tapped dry, often it’s lost forever as a source of water

The groundwater in underground aquifers is one of our most indispensable natural resources, but overuse and contamination from human activities are severely endangering aquifer viability, leading to economic troubles, public health ills, and even water conflict. Once an aquifer is depleted, the ground above it tends to subside into the empty space and closes off the aquifer forever. Right now, human activities are draining aquifers far faster than natural systems can replenish them. What will groundwater-reliant populations do when their aquifers can no longer be used?

In 2015, approximately 29% of the fresh water used in the United States was sourced from aquifers. A third of the water rural and municipal water departments deliver to households and business is pumped from aquifers, and 90% of the rural population depends on groundwater for its drinking water. Even some major metro areas, like San Antonio, rely exclusively on groundwater. Nationally, agriculture gets 48% of its irrigation water from aquifers. Where surface water bodies are lacking, like in the American West, groundwater’s importance is magnified.

Groundwater makes up as much as 33% of global water withdrawals. More than 2 billion people count on groundwater as their main source of water, and 50% of agricultural irrigation water is pumped from aquifers. It’s a key reserve during prolonged droughts like those in the American West, Brazil, and Australia.

Without groundwater, global water security is far more fragile. But despite its vital importance to humanity, groundwater gets far less attention than rivers and reservoirs, perhaps because it is less visible. But whether we can see it or not, the areas of the world that are most reliant on groundwater are depleting it far faster than it can be replenished by natural processes.

Critical aquifers, most of which irrigate the most productive agricultural regions in the world, include those in:

Population growth is one of the major threats to aquifers. More humans mean more human activities, whether household, agricultural, or industrial. Industrialization and rising living standards are contributing to water demand.

The aquifer under Karachi, Pakistan, is enormous, but it is contaminated with industrial arsenic and, to make matter worse, it is being progressively depleted. In Pakistan, 40% of deaths are attributed to contaminated water. But contamination is not just a problem in the developing world. Much of rural America’s drinking water is suffering from nitrate contamination from agricultural fertilizer.

In Texas, where state officials recently proclaimed they were “about three Lake Meads” short of water, human activities and evaporation do not always explain the aquifer depletion, and the solution to the mystery remains elusive.

Large areas of the Jakarta, Indonesia, are quickly sinking into the Java Sea. One might expect to hear the problem is climate change-associated sea level rise, but aquifer depletion is the greater problem. When aquifers are emptied under the city, the land under the city begins to subside.

And that goes for rural agricultural land on the other side of the world in California. San Joaquin Valley growers have depleted their aquifer so severely that in some places, the ground has subsided more than 20 feet, and the loss of the aquifer’s water storage capacity is considered to be largely permanent.

Depletion in coastal areas worldwide also leads to saline intrusion into aquifers as seawater seeps in to fill the void, rendering aquifers brackish and unusable for most purposes without treatment. In central and Southern California, water management is injecting freshwater into aquifers to halt saline intrusion.

Finally, a new study has determined that there is far less fresh water than thought in U.S. aquifers, but the implications of the discovery are global.

Natural systems cannot recharge heavily used aquifers faster than growing populations deplete them, but we can help replenish them. The use of pervious concrete pavement, for instance, allows water that might have been disposed of in gutters to percolate into aquifers. Managed aquifer recharge (MAR) identifies sites that are ideal for water to enter aquifers and diverts the water to them.

California growers, in partnership with local authorities, are diverting excess river flows during wet years into “water parking lots,” which allow the water to percolate into the aquifer for use in dry years.

Where there is no water to divert, even raw sewage can be converted into high-quality effluent that can replenish groundwater.

In California, cutting-edge water reuse technology, such as Fluence’s membrane aerated biofilm reactor (MABR), has been certified at Stanford University to conform to strict California Title 22 standards. Due to its simultaneous nitrification-denitrification, MABR has very high nutrient removal and produces effluent suitable for managed aquifer recharge and agricultural reuse.

Fluence provides MABR in two lines of products, Smart Packaged Aspiral™, which is suitable for decentralized treatment, and SUBRE, which allows existing wastewater treatment plants to be retrofitted with MABR modules.

Also, in a discovery with global implications, a brackish aquifer under 15,000 square miles of seabed was recently found in the Atlantic off the coast of the U.S. Northeast. Although the area has not yet suffered water shortages that justify tapping brackish aquifer, scientists say the discovery infers such undersea aquifers may be common worldwide, offering a virtually limitless supply of water that is much more readily desalinated than seawater.

A range of Fluence products can help communities safely convert their wastewater into a high-quality effluent to restore their aquifers or allow them to sustain themselves on brackish water reserves. On Cyprus, for instance, a Fluence desalination plant uses brackish water reverse osmosis and has a capacity 10 million L/d of top-quality drinking water. In China, Fluence is commissioning 80 Aspiral MABR wastewater treatment plants that will allow Hubei Province highway service areas to safely replenish the local environment with high-quality effluent.

Contact Fluence for the technology and expertise to turn brackish water into high-quality drinking water and safely replenish aquifers.

The Importance Of Groundwater And Of Predicting Human Impacts On It 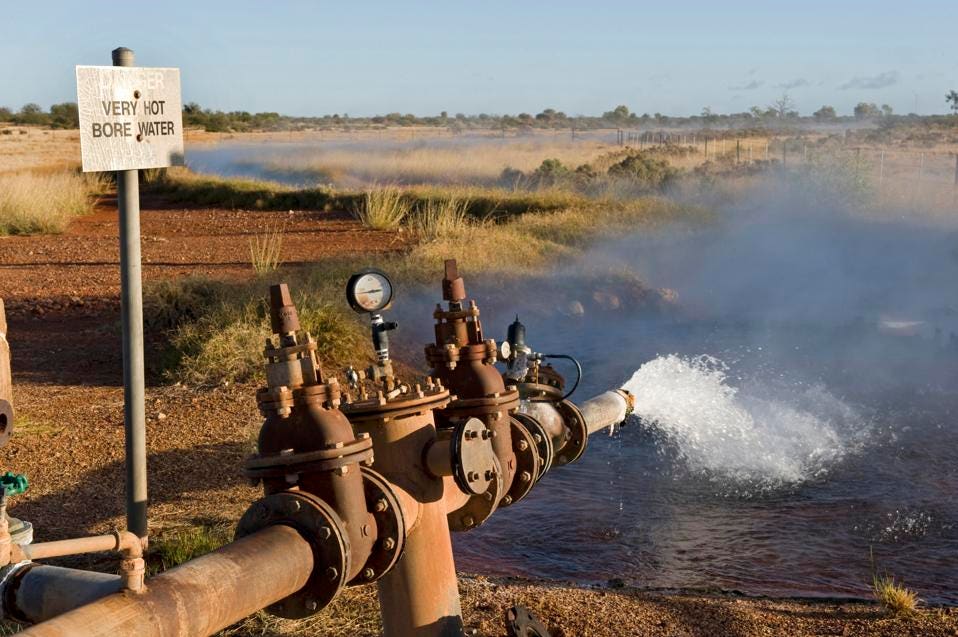 Groundwater being pumped from the Great Artesian Basin, Australia, to produce hydro-electric power.

It may be out of sight, but it should not be out of mind.

Water hidden beneath the earth’s surface comprises 98% of the planet’s fresh water. On average, this groundwater provides a third of all total water consumed, and its preciousness is ever more palpable since Cape Town’s water crisis sent shock waves rippling around the world.

Despite this, its regulation is far from ideal – especially now that drought conditions are intensifying around the globe and people are increasingly drilling downwards.

Before we even start to improve groundwater management, we must better understand and measure it, says international groundwater expert Craig Simmons, from Flinders University in Adelaide, Australia.

“A lot of the problems that we have in groundwater are because we don’t have even the basic understanding on some of these systems,” he says.

Many subterranean aquifers have been around for centuries or even hundreds of millennia, nurturing trees and vegetation, permeating spaces and crevices in dirt, sand and rock and networking with rivers, streams, lakes and everglades.

Farmers use bores to draw water up from artesian basins and windmills generate energy to pump it from underground aquifers. Groundwater is used to wet vast swathes of agricultural land. Many cities source it for irrigation and industrial processes that might be less obvious, like beer and soft drink production. Other activities that draw on groundwater include mining and coal seam gas extraction.

Above all, it is an important source of drinking water, supplying half the world’s needs overall. In the U.S., half of city populations and virtually all rural people rely on it. Some Australian cities depend increasingly on it as surface water sources dwindle.

But groundwater is not an infinite resource; it’s like drawing money from the bank without replenishing it, Simmons says.

Over-exploitation can lead to a litany of problems. 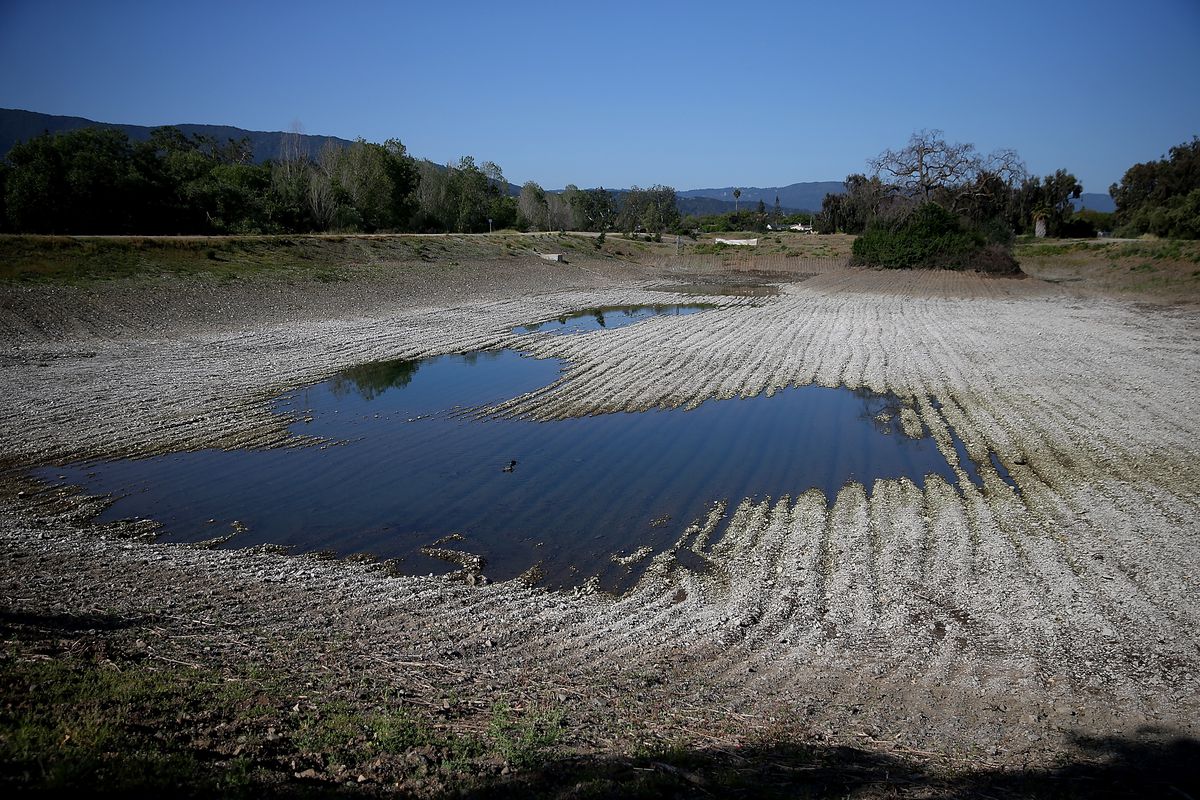 Extracting groundwater causes drawdown. This can impact delicate ecosystems and biodiversity. For instance, groundwater feeds vegetation and replenishes intermittent streams that communities of fish and aquatic invertebrates depend on. Wet streambeds are also important sites of microorganism activity, carbon and nutrient recycling.

Some areas may house species that live there exclusively. In the Great Artesian Basin, Australia’s biggest groundwater basin, for instance, 98 endemic species of flora and fauna have been identified, and these are at risk from drawdown.

Subsidence is another problem that occurs when the ground level sinks from over-pumping and resulting depressurization.

“The land just compacts because there’s reduced pressure,” Simmons explains. “It’s like taking air out of a tire; it just starts to collapse under the weight of the rock and soil.” The most extreme example of this is in San Joaquin Valley, California, where the ground level has sunk by more than eight meters since the 1920s – that’s nearly the height of a telegraph pole.

Seawater intrusion is another issue. It occurs naturally along the coastline but can be aggravated by extracting groundwater from nearby aquifers. This is a major problem in regions like Australia with high coastal populations. If the seawater seeps inland it can contaminate bores with salty water, wasting money and taking centuries to remedy. Excess pumping can also draw salt in by drilling deeper into the earth.

Groundwater can be contaminated by other pollutants such as gasoline, oil, chemicals, pesticides and fertilizers. Toxic substances from mining sites, landfill, hazardous waste sites and untreated septic tanks can also make their way into it.

Simmons’ research focus is complex groundwater modeling, which he says is a fundamental tool. “It’s like being able to predict the weather tomorrow,” he explains.

Current groundwater modeling has a huge error margin. “It’s kind of like saying the weather tomorrow will be anything between 12 degrees and 43,” he laughs. “That’s kind of not very helpful.”

One aspect of groundwater his team is trying to understand is aquifer recharge rates, which Simmons says is a vital area of management; finding better ways to estimate “how much money’s topping up your bank account, not just how much you’re spending”.

They have also worked on improved comprehension of groundwater’s connection to surface water. This is critical because water allowances could double up if they are managed separately – extracted groundwater might be pulling from a nearby river, for instance.

One of Simmons’ latest projects will model the impact of faults and barriers on the flow of groundwater and solutes at mine sites.

“By combining geological, hydraulic and geochemical approaches with 3D numerical models, we will gain an improved understanding of the role of faults and barriers in subsurface hydrology, and an improved ability to model complex groundwater systems,” he explains.

Ultimately, the world’s water problems will need a combination of solutions to better understand and manage water and tighten up on water use and efficiency, factoring in all water sources.

“It’s about how do you get the right mix of water supplies for drinking water, whether it’s surface water, dams, rivers, reservoirs, groundwater,” Simmons says. “That optimal mix is a critical issue that we often don’t understand – and desal is a part of that too.”

As well as modeling the supply side, it’s important to understand the impact of human activities, such as mining, agriculture, coal seam and shale gas extraction, on groundwater and ecosystems. Simmons’ team is developing software models to predict those processes and impacts as well, to better inform environmental impact statements.

In that sense, accurate modelling will be like a guide dog for the blind, and hopefully give more credibility to widespread concerns about large industries sourcing groundwater haphazardly.

“It’s about looking at the use of water and what the impacts of that use are environmentally,” says Simmons. “And it’s always going to be a social, economic and environmental triple bottom line.”